Twenty-sixteen is going to be a year to remember for sports fans in this country. SuperBowl 50, Cheltenham, the Olympics, the Euros, the All Ireland championships, the Autumn Internationals…. we’re exhausted even thinking about all that is on the horizon, and that’s only the tip of the iceberg!!

In anticipation of a bumper year of sport we’re looking ahead to some of the most hotly anticipated events of 2016 outside of the traditional big four sports in Ireland!

This weekend is perhaps the busiest in Irish basketball as a host of teams head into battle for a place in the National Basketball Finals at the end of January. From the Wheelchair Basketball Final (feat. Ballybrack Bulls & Limerick Scorpions) on Friday 29th right through to the Women’s National Cup Final on Sunday evening, eleven of the teams involved will see their dreams come true, while the other eleven will immediately start plotting to bounce back in 2017.

With men’s and women’s under 18, under 20, National, Intermediate, President’s Cup, and more going on, it is a jam-packed weekend of highs and lows. In the two main competitions we will see if holders Team Montenotte Hotel can come through their semi-final with Meteors and hang onto their title in the Women’s National Cup, while in the Men’s can Templeogue continue their ten game unbeaten streak and take that all the way to the big game on the last Saturday in January? It’s well worth the trip to the National Basketball Arena in Tallaght that weekend to find out the answers to these questions, and more!

Not Super Bowl L, but Super Bowl 50. We have long seen how spectacular this game can be away from the action on the field, so we cannot wait to see what the NFL have planned for the Golden Jubilee of the greatest show in American sports.

Disappointingly for Irish fans of the gridiron it will be a late night this time around with the game taking place in Santa Clara, California at the home of the San Francisco 49er’s, but nonetheless if the craziness of the regular season is anything to go by, then the play-offs and finals promise to deliver a cracking end of season.

Can Carolina Panthers and Cam Newton keep up their frankly amazing form (one defeat all season) or will they come a cropper along the way to a resurgent Seattle side who, let’s not forget, were a yard away from putting back to back Super Bowls together last year. Tom Brady and the new England Patriots are limping into the play-offs but they can never, ever be discounted, and then there is the return of Peyton Manning to the Denver Broncos and how that will boost the men from Mile High!

Wildcard weekend kicks off the postseason from this weekend and we can’t wait…. It’s going to be a fun month of football! (And don’t forget the College Classic coming to Dublin in September between Georgia Tech and Boston College plus added games in the NFL UK programme for 2016!)

It’s a big year for the Irish Men’s and Women’s T20 teams. The Women’s team qualified for the finals beating Bangladesh in the Qualifying Final in Thailand before Christmas and will face the might of South Africa, New Zealand, Australia and Sri Lanka in the group stages of the tournament. With the game in Ireland on the rise all the time, let’s hope the Girls in Green can continue on their fantastic form.

The Men meanwhile will have to overcome Bangladesh, Netherlands and Oman in Dharamsala to qualify for the Super 10 section of the World Cup. With the ICC Intercontinental Cup ongoing as well, it promises to be a busy year for the cricketing fraternity in Ireland.

There really is nothing like the All England Championships at SW19. Sure we love the all action of the Australian and US Open tournaments and the French Open is a fascinating and gruelling task for the world’s best players, but, especially for those of us who grew up watching Wimbledon and breaking out our tennis racquets for two weeks every summer when we were younger, there is something special about the third Grand Slam of the year.

Serena Williams and Novak Djokovic are the holders from 2015 of the respective singles titles, and it will be a brave gambler to bet against either again in 2016 if they stay injury free. Serena has a chance this year to go above the legendary Steffi Graf this year to become the most successful player in the Open Era in terms of Grand Slam victories and she could do that in London. It will be interesting to see can anyone challenge Williams (Simona Halep anyone?) or will she beat everyone, including the ghosts of yesteryear, along the way.

The Ryder Cup is one of the greatest events in sport and this year’s event at Hazeltine National Golf Club in Minnesota will no doubt be another fascinating duel between Europe and the US.

The European’s have held sway for the past number of renewals, so the Americans will be very keen to ensure they don’t lose on home soil. The subplot of Rory McIlroy and Jordan Speith’s battle for World number one should provide extra spice along the way while every event on the European and PGA Tours take on extra special significance in a Ryder Cup year – hopefully Shane Lowry can continue on his upward curve and make the breakthrough onto Darren Clarke’s team this time around. We know one thing though, we can’t bloody wait!! 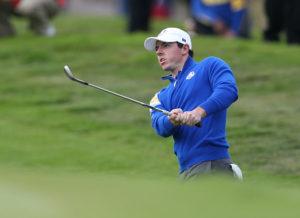 DISCOVER YOUR TALENT WITH PUMA & ELVERYS